The superfast Mu-mu (moomoo?) Also known as my dressing gown.

You may think I am totally kidding about the mu-mu thing but no, it really looks(ed?) like one.  However, it is almost the most phenomenal comfortable stupid looking thing in the world.

You may be wondering WHY I wanted to make one in the first place; who sees me in my undress enough to wear a dressing gown at events?  Well..remember this? Yeah. So I need to cover up and wearing the Doctors filthy banyan is not really ideal for pretty lil' ol' me.  I made the decision to whip together a new over garment the Monday or Tuesday before a Friday talk I had to do here in Nashville.

Those who know me well enough will realize this is not an uncommon thing for me to do.  At least this time it was something as simple as a Dressing gown and not a full blown 1812 wardrobe.  I'm sort of learning.  So I had a few inspiration pieces scoured from the internet, but none of them REALLY appealed to me.  You would be amazed at how few extant early 19th century dressing gowns are still around.  Perhaps it is due to the frequency in being worn.  I had one labeled "dressing gown" on my Regency Inspiration pinterest board but it looks more like a nightgown.  So no.  I sort if just made something up with a general "old time-y robe" feeling, hoping none of the little old ladies or anyone else who sees me in it will call me on it.  I got a wonderful gift of five yards of this beautiful cotton damask with a dark gold back ground and lighter gold print of florals, foxes, birds, stags, and hounds spread all over it, which delighted me.

I threw together the messiest and quickest mock up ever; it really didn't need to be special after-all its a rather shapeless garment. (I cheated and used a template made from my spencer pattern.) 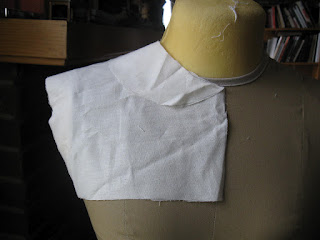 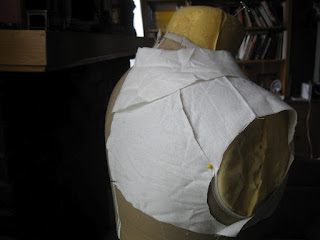 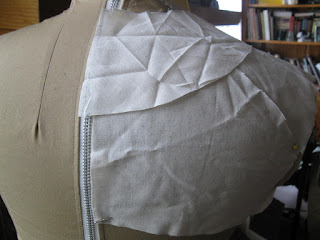 The mock up took a bit of tweaking; and in the end I chose not to use this collar, for one thing it didn't work like I had hoped and for another it looks TERRIBLE. So I went with just a typical fold down collar as seen on a couple of my spencers, stolen lovingly from my 1890s riding habit jacket. I think outside the box.

I threw the majority of it together in an evening, and wow that fabric is heavy when gathered.  Since I had so much of it, I was able to play and use the animals as I saw fit; I placed a fox in the center of the back of the gown, a stag on the left and a hound on the right. (or vice versa, I don't know, I'm not looking at it.) 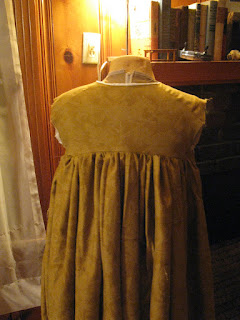 After I made the Doctor his banyan, I swear he lived in it most of the winter.  Now I know why. I have never really had a satisfactory bath robe.  Having sort of one now is so delightful.  I made sure to put bit loose sleeves on it so that I would be comfortable and have a full range of motion.  The armsceyes are a little tight under the arm, but due to the construction it isn't something I can really fix, and it isn't bothersome to the point of madness.  When I finished it, I promptly donned it to prance around the house in. Pants? PSH. I have a dressing gown.


I think the next step is to add a belt, I picked up a big horn buckle from Textile Fabrics, and will make a self fabric belt just under the bust to hold it closed, and give it a little bit of shape.  Though I look about 9 months pregnant no matter what I do.

Stay tuned for the saga of the Frock Coat of Tears and Foul Language!

(And some possible butt shots. Thanks, Doctor.)
Posted by E. Waterman at 9:47 AM 5 comments:

Because everyone wants their feet to be sexy. (And they want to know it, too.)

The mastermind of sexy-footisms, Ms. Am-Duch, is at it again, folks! For those readers of mine who are NOT followers of the amazing Lauren Reeser, you are giant slackers and you need to fix that. Now. Go. Follow the rabbit hole into AWESOMENESS.

Anyhow, she is out with a new wonderful, beautiful, stunning, and really smexy pair of shoes, the Pompadour!

Get them while they are hot, ladies and gents, for if not enough orders go through, no one will have them, and that, my friends, is a damn crying shame.  You know you want to wear these with modern skirts/dresses/or whateverthehellyouwant.  Really, I would.  Same with the Astorias.

And my favorite? It is a close tie with the Kensingtons and the Pemberlies! Both of which are perfect for each of my re-enacting eras, and hello comfort! (Secretly? MUCH better than Fugawee for a much lower price!)

A remake that will never end. And channeled Kermit the Frog.

Some gowns have such a powerful addicting draw, that you can't help but want to constantly work on them.  They fill your dreams (if you're lucky enough to sleep) or you lay awake for HOURS thinking of what to do next or what to do to make this costume even more stunning or interesting.

Then there are some that fail enough times and must be redone so often that they lose all luster and all you want to do is throw them into a pit.  Poor archery gown.  She is in that situation now.

Those who lurk and stalk me in other methods and who know me closer remember this archery gown.  It is another one of those that I started for my first trip to see the Doctor, back in 2010.  It was a good gown, in theory, but had some fit issues.  For one, I made it much too tight and I was uncomfortable most of the day, in fact about halfway through, post the archery contest, I had a heat related incident..and talk about serious embarrassment..the poor Doctor, I am sure he thought I was incredibly frail! 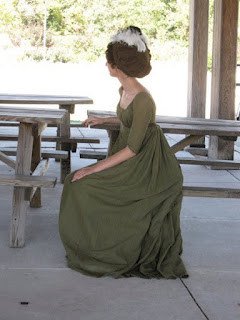 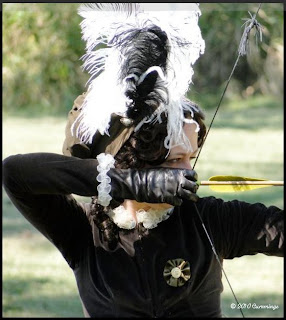 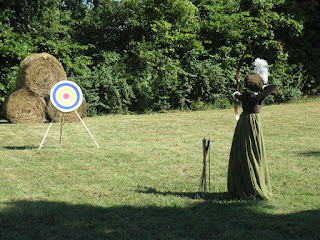 After the event I threw it into a box with the rest of my costumes when I was moving out to TN, and didn't wear it again until a year later, at the second 100 years.  Of course this is post when I cut out the lining of Ol Faithful, so I did it with this gown as well.  That was a horrible, horrible idea. I wore it paired with a floral summer weight redingote style of garment, which probably saved me mass headache in the end.  I really hate that outfit by the bye..I felt like I looked like a fool that whole day.  Not at all bad-ass and archerish like the year before. 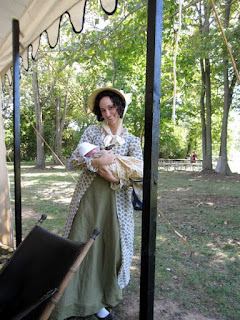 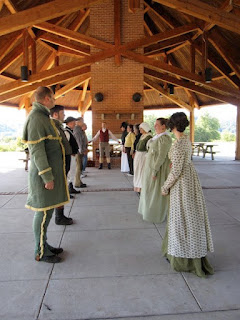 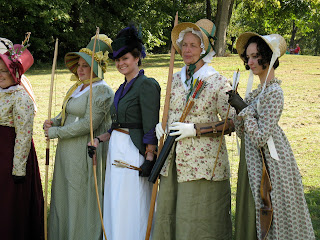 I did a full day of archery, got my ass handed to me deservedly since I didn't practice for a whole year solid.  Then we danced.  Then I ran around some more.  Then we danced AGAIN that evening.  I kept feeling a popping sound whenever I would move my right arm in big motions, and just assumed it was the stupid pelisse..Nope. My right sleeve on the green gown had come almost completely out, and was hanging on by maybe a half inch.  Oops.   Then, when hunting for a missing arrow I got on my hands and knees to see if what I kicked was an arrow.  It wasn't, and my dress was ruined as I kneeled in something wet and put a stain on the front.

So that was that, when I got home I took the thing completely apart.  Luckily for me, there was enough fabric in the back to completely make a new gown, and I have been slowly. 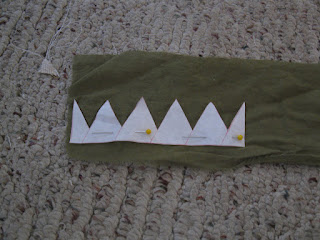 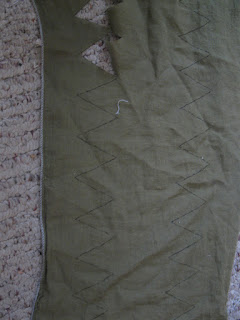 Then I began to roll the hem of the vandykes thinking it would totally keep its shape! I was so wrong.  I couldn't STAND how it looked, so I thought well I can cut more and sew a two layer right side to right side.  I got halfway trough that and said no, this is also garbage. Finally, I cut off all the triangles, and will be making a SINGLE ruffle, as I do not have adequate yardage to do anymore.

At this point I am beginning to despise this gown and I have just forgotten about it..randomly doing some more inches on the rolled hem and loathing the process completely.  Don't you just hate it when projects must take a drastic detour?  I think this mishap may be the reason that I am so tentative to cut into another gown.  Some fabric I can never get my hands on again; it was purchased in Los Angeles in February. Eeep.
Posted by E. Waterman at 9:16 AM 3 comments: