Yeah, well, things happen and really what can you do about it.  In my case, SEW!  You see, I got the flu pretty bad I guess a little too close after having gotten ANOTHER illness just before that.  I live part time with four children ranging in age from Elementary to High School...you can imagine the pathogens brought back from that environment.  So instead of wallowing in my self loathing and pity, I spend a lot of time hacking through my fabric stash to make up the gowns that the fabric was bought for.

Anyhow, less about that, bring on the projects!  The first thing I made was a short sleeved day gown made out of a dark teal cotton gauze I got in Los Angeles when I was there for my television debut on Judge Judy.  No I am not kidding.

I did not really document this garment so here are some finished photos. 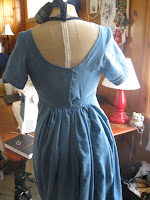 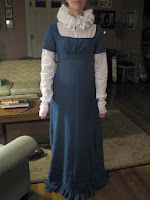 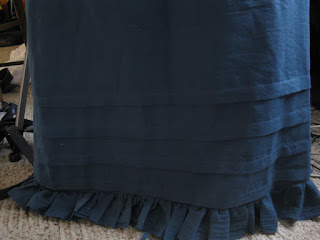 This was my first time putting tucks into a regency dress.  It was a little tricky, but it did look good, I think.  The ruffle...eh..I could take it or leave it.  I may take it off or at least shorten it it makes the dress too long.  I wear a long sleeved giant ruffle chemisette underneath it.


After that I started on, and completed, two other gowns - A ball gown worn at the Locust Grove historical ball that I also did not document well but it ended up looking very nice.  There are almost 200 glass pearls sewing all over it.  It got finished, then went through a couple of alterations that made it look much better. Here are some shots of it before the alterations. 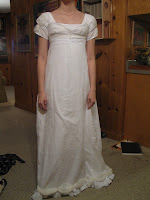 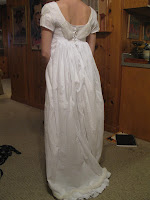 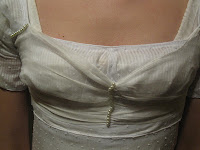 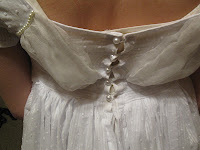 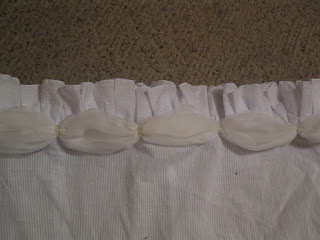 I learned that working with silk gauze was one the most aggravating things I have ever done in my life. I wanted to bash my face on the desk more than once. So what do I do? Decide that I want to put it also on my wedding reception gown on top of China Silk. Yep.  Surprisingly the hem treatment, shown above, was really the most pleasant thing to do.  At the join of each puff there are about 6 pearls sewn down.  I decided to go rather froofy with this number.  For both of these garments I used the same bodice pattern that I draped.  It gave me some fits and needs some great tweaks...or to just scrap the whole thing. Below are the pictures after I did alterations to the bodice - the hem I left alone. 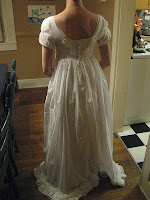 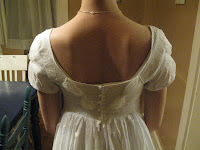 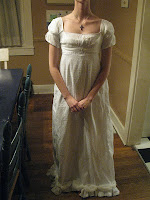 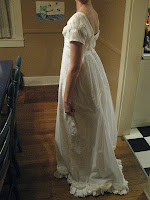 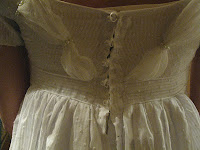 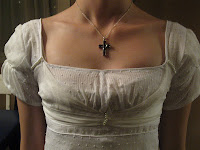 The fabric came from Berkeley when I was back in California for the Dickens Fair, and I bought it at Stonemountain and Daughter with Chrissy.  It combined two of my favorite things - Dots AND stripes! It was a dream to work with..but a bit prone to static.

I also made a new pair of stays, which I desperately needed. I have zero images of these currently but will take and post later.

I had paused a striped gown in the middle to finish the ball gown in time for the event, and has lots of documentation and things to say about it so I will post it at a later date.

Obviously I had given up on the bonnet because I lost all of my images; so don't judge me.