The Regency Wardrobe Frenzy: Maggie is a mean tease.

Don't even try to argue with me because I can promise you I wont budge. This is whats going to happen with these costumes: I am going to post in progress shots up to a point, and then after the event (so..like 25 days) I will have pictures of the completed gowns IN ACTION!

Now now, stop throwing such a hissy fit! I have legitimate reason for doing this other than the fact I am a heartless and cruel harpy. Ok that may just be the only reason. NO. It's because these gowns are now going to be a surprise to a very important dotor and I'm trying to be impressive.

You all love me anyhow. So whats up for the next two? Think Lots of voile, daquaries, and experiements with fabric dye and a washing machine.
Posted by E. Waterman at 9:07 AM 2 comments:

The work on the second gown, the snow white voile over ivory base is starting to come together, and after three times of regathering the bodice parts I ballsed up and said "Lets sew this bad boy." And I did.
And so far, the gathers have held wonderfully! Lets break it down to a play by play.
I started with the ivory base, the pattern for the regency bodice that was more fitted and not the gathered one and did what gathering I had to do under the bust to make it fitted. 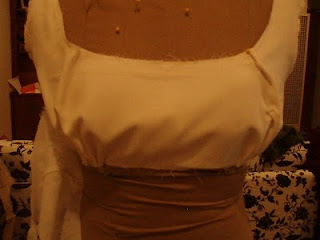 I had to do some strange tucks in the neckline because this pattern always has strange fit problems, but after the outer fabric went on you couldn't tell. Also nicely, since the under fabric is so stiff, it crates more va va voom in the bust line as Mrs. M calls it.

As for the outer fabric it took me a few times to figure out how I want to gather it, and finally decided to just gather it all the way across, as it is still a period technique, and makes the fabric look lovely. 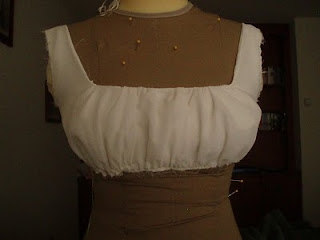 I think I need to go back though and tone down some of the puffiness.

I also decided I wanted to do some interesting things with the back so I made the edges longer and threw some gathering stitches in the back edges just for some visual interest.

They kind of came out, though not as I had in my mind, also the sewing machine kind of mucked them all up. 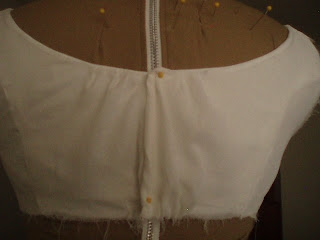 I am thankfully on task for this outfit so far, though I didn't get any work done today.
Instead this is what I did: 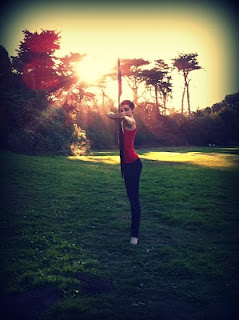 Instead of being smart and leaving a perfectly good dress alone to be wearable for the event, I decided I wasn't satisfied with the neckline and the entire look of the gown.
Here: Reference shots. 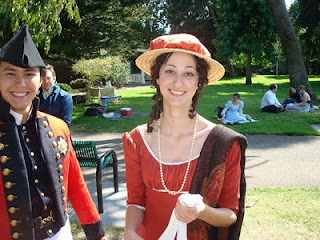 Just a basic boat neck. Well...it seemed kind of boring so, I wanted a wrap front which seemed better with the sleeves and such. Please forgive the hat. It makes the baby jesus cry.
So after taking out all the gathering stitches and staring at it figuring out what I wanted to do, I said "Eff it!" and slit it right down the middle and mucked around a bit with it.

In the end, I got the desirable result: A faux wrap front gown: 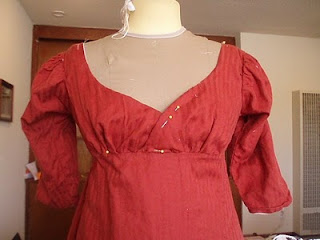 To get the desired look I just had to get really creative with pins and some hand sewing. 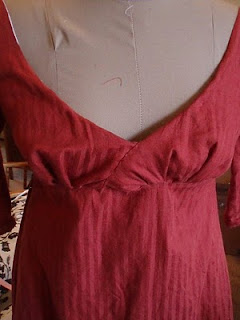 I think after I make sure the top and bottom are sewn down Ill take out the stitches down the middle to make it look like a real faux wrap.
Now onto the white gown! Which has allll been cut out.
Posted by E. Waterman at 10:18 PM 3 comments:

The Regency Wardrobe Frenzy: One thing down...However much else left, I've lost count.

The stays, finally, are finished! They work wonderfully and were not terribly difficult to make. After finally getting everything cut out, I mucked around with darts, had little problem with that then came doing the boning channels (hur hur.) 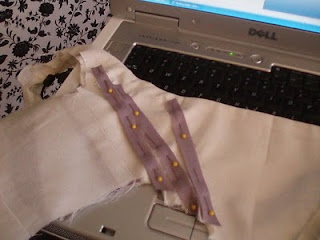 Ideally I would have hit the boning channels in between fabrics but I darted all the fabric down into one, so this was the last option. It's the inside, though, and if there are any underwear snarks, well then they need to not be looking at my underwear. Quite frankly the only ..people who are going to be seeing my skivvies will appreciate them as is.


I had a little trouble sewing the channels as the bias tape was shredding and almost the channels were too small but I went back and hand sewed where I needed to go. Then with the help of magical roomy Amy, I was laced in and UH WOW. HI.

They work. Needless to say. Going to enhance just a big but I don't think too much. 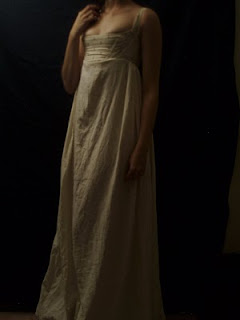 So tada! Stays!! Now onto the rest of everything else I need to do. Up next? White batiste gown with ivory underlayers.

The Regency Wardrobe Frenzy: Square One

After an inexcusable absence which I wont go into detail about, I have returned with a vengance and an entire OTHER blog to keep track of. (Oh jesus.)
So onto the topic at hand: I am throwing together an entire regency wardrobe (Three gowns, two [maybe three] spencers, three hats, and possibly a fourth evening gown, shift, stays, and wig) for a rather important event in September. Yep. September. I basically have a month to get this done; so let the frenzy begin.
Like any normal person, I started with the skin out..kind of. Stays. I've never made regency stays, in fact, every corset I have made for myself has been kind of a joke..sad to say but I'm not so good with underwear. So; after some research and obsessing, my first adventure was to try to make something out of the regency pattern I already had. That was a bust, because I had NO IDEA what I was doing (read: really really no idea) so that basically got scrapped in a fit. So I bought a pattern: Specifically the 'Reconstructing History' regency stays pattern.

Yeah don't. Ever. Use. Them. It was the biggest waste of my time and money i have ever experienced. See what most of you don't realize is that I am INCREDIBLY flat chested. Not oh hey its ok theres something, its basically not even a cup size to put it blatantly.
Ok enough TMI, onto more pictures.

Back to before I knew the pattern was a giant failure, I dove headfirst into stay making, by first cutting out my patterns, which at the time seemed tomake..well..some sense. 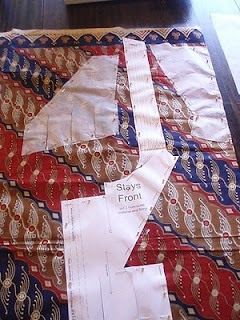 Yes, it is always a requirement to make the ugliest mock-ups ever.
So about an hour of frenzied sewing later, I get the strangest damn thing I have ever seen, which btw did nothing for my attempt at a regency shelf, stuffing or no. 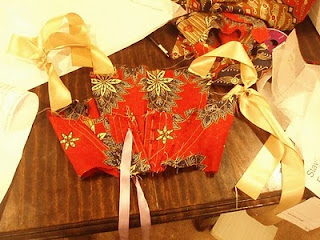 In theory they looked like little tiny half stays, right? Post cutting off tabs of course and point.
Then I put them on abby.. 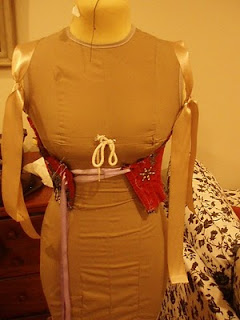 As the picture says FAIL. I didnt even bother finishing lacing them up, I basically balled them up and chucked them across the room. So after waffling about what to do, I was assisted by two lovely Lauren's. Lady of Portland house sent me an amazing tutorial how to make a bodiced petticoat out of the Simplicity regency pattern, which I had.
And its working ITS WORKING!!

I did the mock up with the help of my wonderful roomie Amy who did the..very intimate darts. Much to the serious entertainment of The Doctor.
So after we got it roughly how we wanted it, i stuck them on abby and smoothed everything out 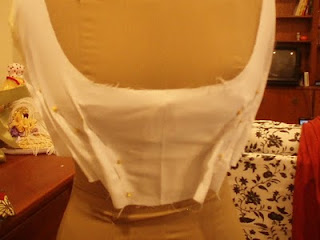 Now thats pretty good looking if I do say so myself. 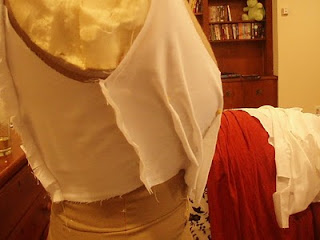 The darts are meant to push the bust up and in a bit to give the lovely regency shelf as it is now being called, once the boning is in place and im placed up it will hopefully do the trick. I will also be supplementing under the bust with a little pad to..add what nature deprived me, sort of speak.
After many awkward moments and giggles, the mock up was finished and I was at liberty to cut out the pattern of my actual stay fabric. 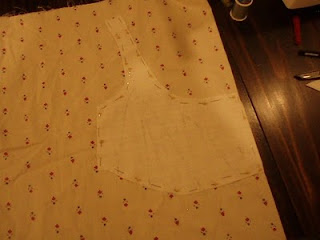 By this time it was well past midnight, and therefor my bedtime. Tonights adventure will be getting them all sewn together and then mind the bottom. I plan on sewing the top edges right side to right side as I want a drawstring channel using the seam allowance and top stitching. Not entirely period but easiest for me.
More adventures to follow! Stay tuned.

Yes, I know, I have vanished entirely off the blogesphere face of the earth. I promise, it has a good and legitimate story, and now that I have a camera and computer again I can resume costume..y..things.

In the mean time; do take a moment to add to your queue of blogs, the wonderful world of Maggie's Bonnet-arium...And Beyond!!

I am starting up a hat bizz..FINALLY. Please stop by for any of your hat-needs!
Posted by E. Waterman at 12:28 AM 4 comments: