I felt incredibly accomplished when finally I finished all of my underthings – It really was something I had never attempted before, so I counted myself proud.

I think they say, though, pride cometh before the fall..or some such nonsense, so with great gusto and excitement I plowed into getting the bodice and bonnet tackled.  The skirt really wasn’t an issue – a big rectangle pleated into a waistband which I had the foresight after many bad experiences to make quite wide and faced with some extra buckram.  That was done, aside from hemming, in a day.  I planned to wait to hem it until I had arrived in California, to throw myself on the mercy of Chrissy or Curtis, her boyfriend, to hem it for me when it was ON me, petticoats included.

As I knew I could not drape an 1840’s coat bodice to save my life I needed to decide on a pattern and with great haste – I had no way of ordering anything online.  I perused Simplicity’s catalogue and decided finally on this gem. 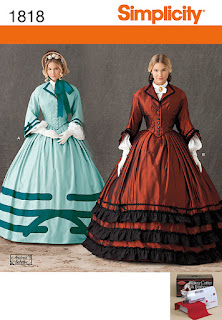 There was no description of the front of the bodice on the fashion plate so I felt myself at full liberty to do just what I pleased in that corner.  I had many inspiration images, but the one I found the most delightful and really to my simplistic, masculine driven military inspired tasted of the Regency was this beautiful painting in which I could zoom super close in.  I love you, Met Museum. 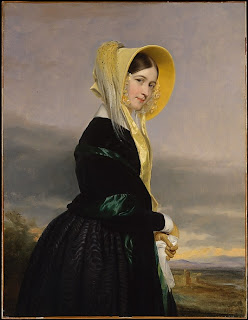 Aside from the lovely hint of military frogging or buttons on the side of the bodice terminating at the armsceye, the lovely slender plain sleeve and white cuff made my mouth water in delight.  Yes, that is a thing.  I made up my mind finally on that decision when I saw my boss wearing a sweet black sweater with white cuff and collar, and when I told her that her particularly favorite garment inspired my 1840’s bodice she was giddy.

I loved the peplum on the fashion plate I used as inspiration, and had no fear altering the original pattern to add it in – my spencer pattern for 1812 has no peplum and I am frequently adding one in to hide the distance between my spencer and waistband of gown.

Everything seemed to go well – It took me maybe three mock-ups and I felt like I had finally gotten it PERFECT. 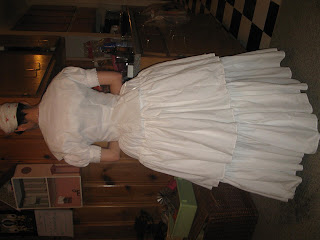 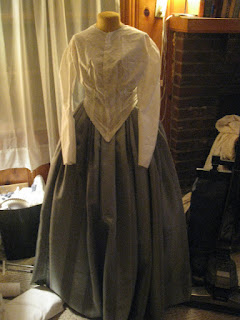 In the end I shortened the peplum just a bit more and seemed satisfied.  But something was…Wrong.  I don’t know WHY it is, but when I cut and began to assemble the final garment everything seemed so much BIGGER! I was furious and panicky – my time was running very low. I said to myself “Oh hell, I will just take it in here, here, and here.”  Don’t do that, people.  Just don’t.  It RUINED my garment.  I must have assumed that after moving to the south and gaining some weight I changed a WHOLE GARMENT SIZE up; which was not at all the case.  Ooops. I had no more fabric in which to make an entire other bodice with the peplum included, so in a fit of rage, panic, and heartbreak, I had to forgo my favorite part of the garment and stick with the pattern entirely with a point in the back.  It came out right well, I suppose, so no harm no foul. I also decided after some deliberation to make it close edge to edge with hooks and eyes since my buttonholer was broken.

At least I can say that making a new, curved, two part sleeve pattern from a straight one piece sleeve pattern went relatively painlessly.  Thanks to my lovely friend Lauren at Am. Duch. I did it with only two mock ups – the first being a little wonky.  It did some out rather tight and I had trouble bending my arms up all the way whilst in costume but I think I can chalk that up to the velvet being thick.  I loved the look of how tight they were, though. 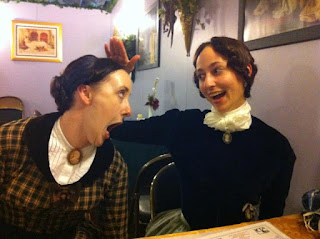 Aside from how absurd this picture is it shows that under the bonnet ties and insanity I opted for a traveling look ala Young Victoria with the jacket and cravat.  I thought it looked sharp as hell. Also I piped my  neck edge and bottom edge and armsceyes, because I could.  I also made my own tassels..I'll do a tutorial on that some other time.

Tune in next time, for the raucous tale of my first buckram bonnet EVER!
Posted by E. Waterman at 5:47 PM 3 comments:

Yes, yes. I understand - I have been so terrible about updating that it is downright laughable.  You can forgive me right?  Well you will have to once I post amusing pictures.

Lately there has been too much of a dry spell in regards to sewing to really update..I made the Doctor a new Regency shirt..that is about it, I suppose.  I have a pile of UFO's and bursts of inspiration but very little motivation, unfortunately.

I did however create an outfit for the San Francisco Dickens Christmas Fair which unfortunately I did not document well...But I can talk about it to the best of my abilities.

My trip to Dickens was a surprise for the amazing Christina at The Laced Angel from her sweet boyfriend who thought she might like my harassing presence as a gift for their anniversary.  I think he was right, anyhow.  I knew since August that I would need something so I started the fun of researching.  All my images can be seen here.  I decided almost immediately on this fashion plate:


I knew I already had some lighter weight cotton velvet in a dark blue hanging around in the form of a pelisse which I unfortunately never really enjoyed wearing - it was always too small and uncomfortable.  There was plenty of yardage there for the little coat. Before I could get any of that out of the way, I needed underwear.

First things I made were my chemise and drawers - each going together in a day from beginning to end, flat felled seams included.  They were a really good start because they were easy and gave me confidence.  I should learn that easy beginnings never signify easing endings.  Christina showed me a sweet pair of pin-tucked drawers that were originals she bought at an antique store that I fell in love with so they served as an inspiration for my drawers.  I edged and detailed my underthings in a simple cotton scalloped lace.


After I got all of that done, I had to knuckle down and start on the corded petticoat which I expected to be much worse than it really was.  It was absolutely time consuming, don't get me wrong, but I was happy I could figure it out MOSTLY unaided.  I used a very wide cotton macrame cord because A) I was impatient and wanted to do as little work to get as much effect as I could, and B) it was available the cheapest for the most amount. I spaced my cords about an inch, maybe a little less, apart and did my first grouping of 8, a second grouping four inches up of 6, a third grouping four inches up of 4, then a fourth and fifth grouping of two.  I was worried I would not have enough of a bell when finished but after I starched it I was completely SHOCKED to see how puffy it was! I was delighted! I pranced around the house in it to see how, if at all, it would get tangled in my legs.  It did not ONCE. I was gleeful, nothing irritates me more than having a multitude of petticoats trapping my  legs when I walk.


After that was all finished I made a secondary petticoat to add EVEN MORE FLOOF because thats what I do.  I wanted a bell that seemed as if I was wearing a hoop, yet still being period correct. I had just enough muslin after buying the bolt to make a two teired petticoat to wear over the corded one.  I've made them before, so two did not seem like any difficulty, and it wasn't.  It went together rather quickly as well. I used the tried-and-true method of cord gathering the teirs and I am happy I did - each teir was roughly 7 yards.  I did not starch it until I was in California and WOW it was incredible.  I used StaFlo which is a dippable starch you can get at walmart, and it works VERY well! All you 'Bethan nobs with ruffs, look into it.

After I assembled all of these things, a bum pad, and the chemisette I was going to wear under my jacket, it was time to start on the actual clothing AND the bonnet.  Stay tuned for more exciting adventures in the 1840s! I promise I wont wait months to post again. Really, I wont.
Posted by E. Waterman at 1:40 PM 7 comments: