Journey into the year 1811; A wonderful project with wonderful friends. 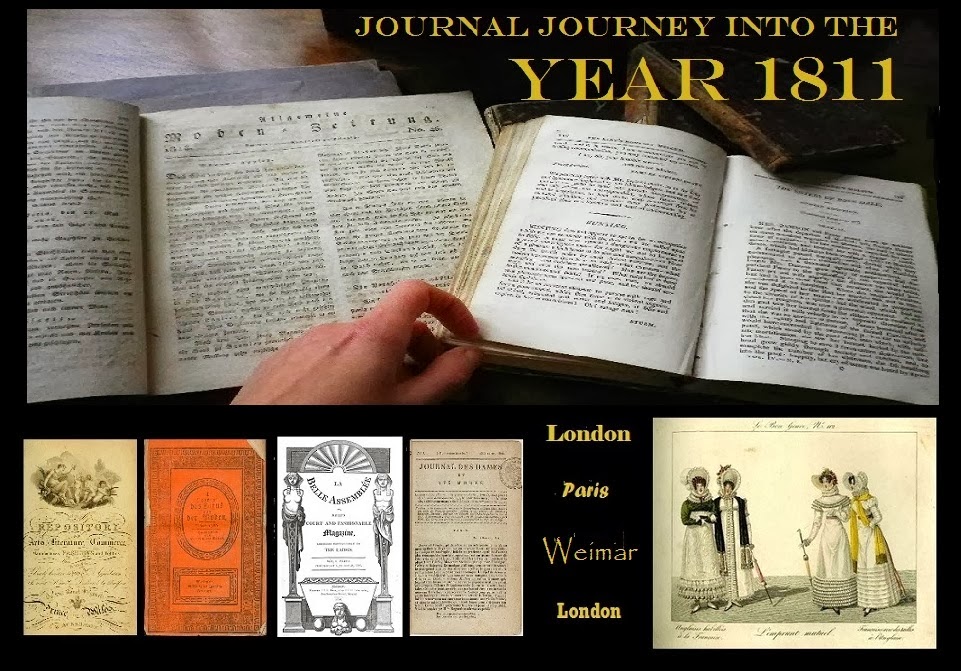 Be wholly prepared, dear readers, for the next 11 months containing a real monthly update! Why? Well, let me tell you of the most wonderful adventure I have gotten myself into!  Three fellow fashion historians and experimental archeologists have embarked on a European journey into the year 1811 by way of four different fashion journals.  Sabine of has taken charge of Journal des Luxus und der Moden, Alessandra has jumped into Journal des Dames et des Modes, Natalie of has uncovered the secrets of La Belle Assemblee; and for myself, I have devoured every scrap of information from Ackermanns Repository.  I am sure you are wondering why on earth this is even a thing, and why have we crazy ladies involved ourselves in such a project, but really, it is simple! How fascinating must it be to see the comparisons and contrasts of these three different countries in regards to different fashions; fabrics for the season, colors, cut, and styles.

So, without further ado, let us being January's review of Ackermann's fashion.

As a note first, you will take notice of the fashions bearing fabric to represent mourning, specifically second state mourning of grey, black, and white.  Princess Amelia, youngest child of Mad King George the III, died at the tender age of 27 in November of 1810 to complications from TB.  The whole country was thrown into mourning as is customary for when a national hero or member of the Royal Family passes away.  La Belle Assemblee gives a little more information in their journal than Ackermann's does in this month about it (e.g. how long mourning will last). 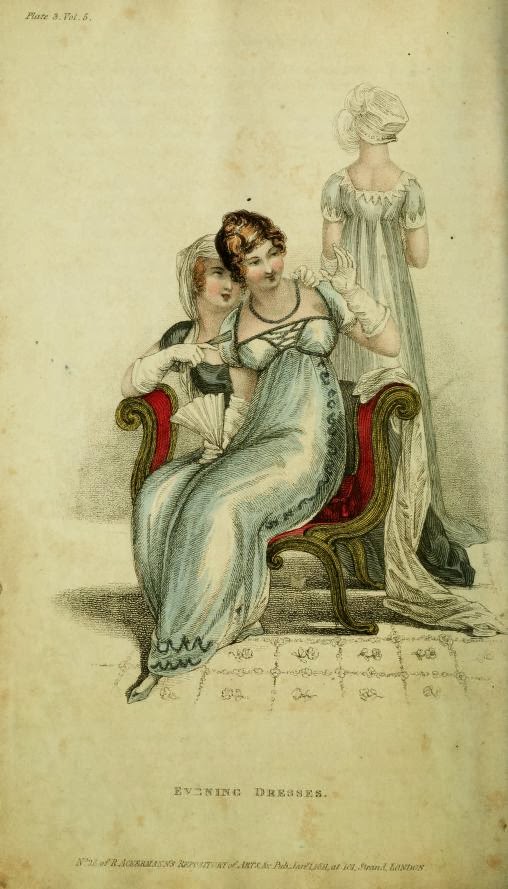 PLATE 5. EVENING DRESSES. Erect Figure.—A French frock (1), with demi-traine of black imperial gauze (2), worn over a slip of white sarsnet or satin ; the bottom, bosom, and short sleeve ornamented with a vandyke border (3) of white velvet or thread lace (4). A white velvet or satin hat, ornamented with two curled ostrich feathers, with a silver or beaded band. White kid gloves and shoes. Sitting Figure.—An elegant Grecian robe (5) of silver grey crape, worn over a white satin under-dress, ornamented at the feet and down each side of the figure with a light and tasteful border of black bugles. Stomacher (6) of the same, edged with black beads, corresponding with those which finish the bosom and sleeves. Ear-rings, necklace, and bracelets of jet. Hair in waved curls on each side the face, divided in front of the forehead with a full plait, and ornamented with a barrel comb of jet. White satin slippers, with black jet clasps or bugle rosettes. White kid gloves, and fan of silver-frosted crape. Back-ground Figure - A robe of black Venetian velvet (7), with short Circassian sleeve, gathered in a knot of white beads or pearl (8) ; the bosom and stomacher (9) to correspond. Pearl necklace, ear-rings, and bracelets. Belt of white velvet, with mother- of-pearl clasps. Convent veil of white cobweb net (10), confined in front with a pearl crescent, a la Diana (11) Sandal slippers of white kid. Gloves of the same, and fan of carved ivory

1. I have noticed a trend in Ackermann's to use fancy terms to liven up their garments, so instead of just frock, gown, robe, dress, etc. they turn it into a Grecian Robe or a French frock.   I do not really know yet if there IS a noteable difference.

2. Imperial Gauze is, as far as I know, described as a sheer fabric with a white warp and colored weft.

3. Vandyke is generally a trim of either fabric, lace, or ribbon that is formed in a zig-zag shape.

4. Things described as "thread" are generally cotton or linen. Perhaps this is an early form of tatting?

5. Again with my theory about fancifying names, the plates make it a little difficult to tell if there is really a discernable difference.

6. This term stomacher appears frequently from about 1809  until 1813.  I have no idea what they mean because unfortunately we cannot see the figure! There is a lot of debate in our clan on what on earth they mean by Stomacher.  I know that sometimes drop front gowns are considered "stomacher" gowns, so perhaps that is what they mean?  The mystery is thick!

7. I have yet to find a description of venetian velvet.  I have also never seen it described again.

8.  It took some hunting but I think with the help of Sabine, we have figured out what the mean by "Circassian" sleeve, which is described frequently!  The hint about "gathered in a knot of white beads or pearl" helps to narrow down a shape and style.

9. Again with the stomacher, but this time it says "bosom and stomacher" which muddies the water a little bit, no?

10. I can only imagine they mean a long veil by "covenant" veil.

11. A pear Crescent a la Diana likely means a pointed diadem like seem in grecian and roman portraits of Athena or Diana. 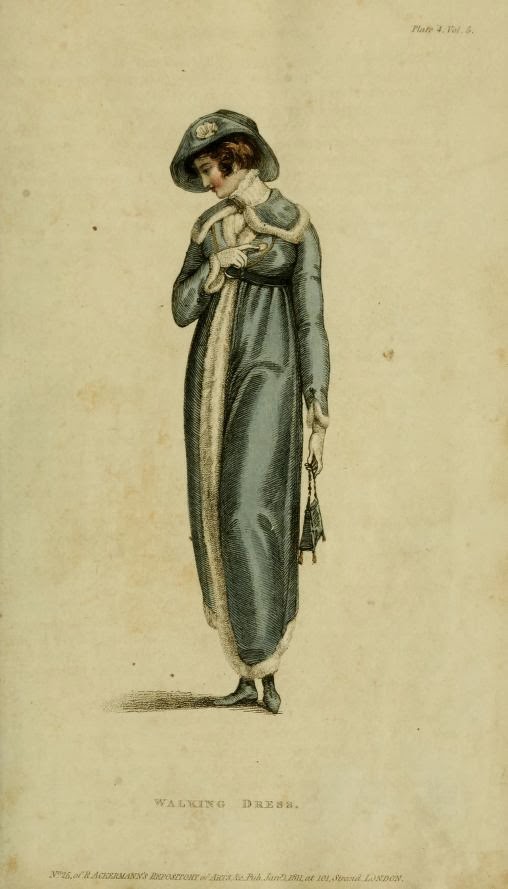 PLATE 4. A WALKING DRESS. A round high morning robe (1) of cambric, with deep full-trimmed collar. A Swedish coat (2) of lead coloured cloth, or black velvet, trimmed entirely round with swans- down or blue fox fur. A Spanish pelerine (3) of the same, fastened in front of the throat with a mother-of-pearl broach ; clasps to correspond for the bottom of the waist. A traveller's hat (4) of black or grey velvet, or cloth turned up on the left side with a shell ornament. Half-boots of grey cloth, laced and bound with black velvet. Chinese ridicule (5) of grey Or lead-coloured satin, embellished with black medal- lions and tassels. Gold, chain and eye-glass.

1. A round robe is defined as a general round gown, meaning it is closed all the way 'round, unlike a "robe" of earlier, a la open robe. It is a high morning robe as the state of dress for the time of day dignify. Undress which is used for walking, or morning, require higher necklines than say evening gowns which are half or sometimes full dress, wherein the bosom is more exposed.

2. Again with putting a fancy name.  What makes it specifically a Swedish coat? why is it just not a coat?

3. Same with the Spanish Pelerine.  What specifically makes it spanish? Is it the shape?  How it is trimmed?

4. This style is called a "Travellers" Hat because it is shaped loosely like a round hat that working men wear or traveling gentlemen wear.  It is often used for gentlemen whilst hunting.

5. I can only assume this ridicule is called such because the shape is loosely based on a chinese pagoda?   But perhaps not, perhaps it is the trimming upon it that we cannot see and we do not know.

You can see that grey, black, and white are the prevelant colors that Ackermann thinks is the appropriate colors for mourning, whilst the other London Magazines mentions scarlet.  It is interestin to see just the differences within the same country, pointing to the editors specific tastes. 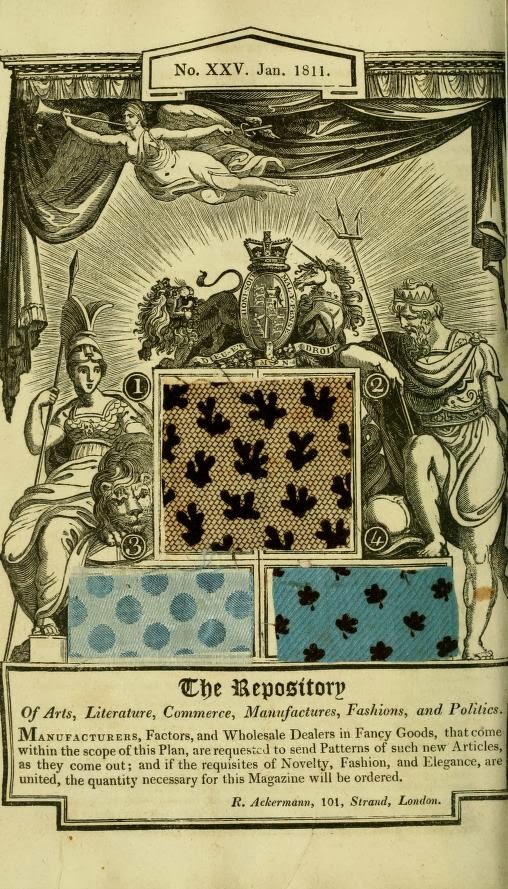 Nos. 1 and 2. A printed cotton, lace pattern, particularly adapted for half- mourning dresses, few the elegance of the pattern, we presume that it is likely to become a favourite article with our fashionable females for morning or domestic wear. It is furnished by Churchill and Blomeiield, 3d, King-street, Cheapside.

No. 3. A silver grey embossed satin, particularly adapted for slight mourning. With robes of this article every order of black trimming, and ‘bugle or jet ornaments, are consistent. The robe should be constructed plain, with a short Grecian sleeve and demi-traine, the robe sitting close to the bust. Furnished by Messrs. Cooper's, Pall- Mall.

No. 4. A grey and black imperial cambric, calculated for the intermediate or morning costume. The Flemish jacket, and simple round gown, with antique stomacher and sleeve, each trimmed or ornamented with black velvet, and trimmed round the throat and cuff's with full plaitings of black net, or black Vandyke lace, are the most tasteful habits we have seen of this material. It may be procured at Messrs. Smith's, 43, Tavistock-streat, Covent-Garden.

We see that in winter, Cloth (which is wool of varying forms), Camric, Sarsnet, Satin, Printed Cotton, and velvet were the height of fashion. Suitable for the cold weather of January.

These fabric swatches are an invaluable source of information into the past in regards to fabric.  A lot of the mindset is that everyone in the period wore white.  It was white on white on white on white always.   Perhaps at the beginning of the 19th century, it was, but as we continue closer into the tens and teens colors for morning, day, and evening become very popular. In future posts, you will see (when not in mourning) there are still bright rich vivid colors and prints.  Each of these swatches are a form of mourning, in greys and blacks.

In viewing these summaries one might think that it has just become more confusing and not, in fact, helping the world to understand the tiny nuances of fashion.  That is why we are doing this, so that we can pinpoint what is confusing and what we do not fully know, so that we can focus research more.  Since we do not have a time machine, we cannot go back and hold these things and we do not have the knowledge of these women of the past, but we are learning as we go!

To see what is going on for the Ton in January for France, please follow the link to Alessandra's journal: http://pavillondelapaix.blogspot.ch/2014/01/journal-des-dames-et-des-modes-janvier.html

And for the other tastes of our grand Metropolis of London, observe Nataline's summaries: http://zipzipinkspot.blogspot.com/2014/01/journal-journey-into-year-1811-la-belle.html

Stay tunes for a few weeks to see what is happening in the chilly month of February!

Labels: Journal Journey into the year 1811